So here we are dealing with the serious global warming issue the establishment has taxed us to address and what happens? The reality is the opposite: we’re in a mini ice age due to the Grand Solar Minimum. Who knew?

I have come to the conclusion that I underestimated the length of time it would take to dismantle the cabal and smack the snoozing public with a brutal reality check—even with President Trump and the patriots in full-on mode.

Sure, I knew it would take time, but when we see no mass arrests, nothing from GTMO and the psychopaths are passing laws to provide them with more Human babies… yeah, it’s going to take longer than we’d like.

The popcorn’s getting stale, and the weather intensifying for a lot of folks across the planet. The wheels are falling off the planet and we can’t do much more than sign petitions.

Incidentally, that one to impeach Nancy Pelosi went from 80K signatures to over 102K in  one day. It took only 10 days to reach the goal. Good work, patriots! The tally is now 116K and rising.

The petition to overturn Cuomo’s law to allow abortions right up until full term went WAY over 100K in short order, too, so it will be interesting to see what results when the White House is tasked with responding. It’s over 264K now.

Many people have been hard at work and I don’t want to short-change those who have taken action to make a difference.  Recently we had news that Costco would no longer be selling Monsanto’s Roundup herbicide, and various communities also blocked 5G at the local level, so people power is important and we have to start somewhere.

We DID get this today from insider attorney Greg Rubini on Twitter, which I find intriguing…

19. and this is when ALL H*LL will break loose

18. on the Mueller report we don’t have a date, yet. Logically, it should happen on Feb 8 if the FBI Anon info is correct… 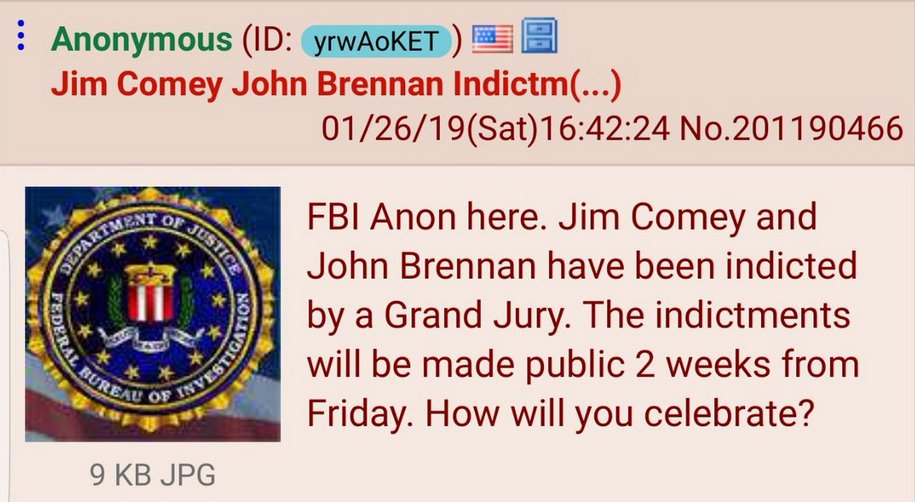 The censorship of the Truth is a BIG problem. Going forward, this is what We, the Truth Media are up against.

We’re in the “reality business”. THEY are also in the reality business. They create a false reality, while we try to counter the fake reality with the real one. Who’s winning? Or is it too close to call?

Thank you, Ben, for bringing this next story to our attention. I had not heard of the “Integrity Initiative” and it needs to get out there.

If you’re not familiar with Ben Swann, he used to work for an Atlanta television station. When he saw what was going on with the mass media in America he struck out on his own to do real investigative journalism. He jumped right into the Comet Ping Pong Pizzagate story and did some great segments on that on his “Reality Check” show, but suddenly reported that he was basically “going dark”, and not to worry, that he’s okay and would be back.

What appears to have happened, and this is just surmising on my part, is that he was warned that his research and reporting on the pedophilia was a dangerous thing to do, and that if he waited a few months, he would safely be able to come back and do more research on the situation in America and combat the “fake news”.

Ben did return and continues to do his research and videos, but he has distanced himself from the pedogate arena—for now. I would say that Ben should be one in the alternative media who is trusted to report on the military tribunals from GTMO or other locations we’re told they are ongoing. David Zublick isn’t giving everyone the warm fuzzies.

Ben Swann breaks down a little known group called the Integrity Initiative which is attempting to propagandize U.S. citizens through something called “clusters.” So… one might call it a “cluster f–k”.

Integrity initiative, indeed. It’s actually the opposite of what it’s called—same as always with these lying, treasonous, deceptive creatures from the black goo lagoon.

Does this make your blood boil? It should.

UPDATE: CNN Hid Images and Video of Roger Stone’s 72-Year-Old Wife Being Dragged Out of Home Barefoot and In Nightgown

There’s a battle on every front. Why does there have to be a “response” to the President’s State of the Union address? It is what it is, he is the best one to report on it, and who cares what the dimms think?

We know what they think, and want, and it is always in direct opposition to what the President thinks, wants, and says—not to mention the opposite of what the People want—just for the sake of contradicting and obstructing.

Abrams’ response probably won’t be worth the time to listen—unless you’re enjoying the show. I’ve had enough.

Here’s a fascinating video from Jesse at BP Headline News/the Waltman Report. (formerly BP Earthwatch) about how those galactic waves are formed.

If you like history, you might enjoy this review of who’s been running the world and why we want to eliminate them. Thanks, J.

It involves a vast network of inbred predators who believe their bloodline gives them some sort of privileged power to dominate and tyrannize others as slaves (and food).

Some of them like to rub our noses in it and the entertainment industry is rife with clues and hints about reality we think is fantasy. Take Game of Thrones, for example.

The research in this video involves Donald Trump, and perhaps enables us to see why he is the perfect one to “deliver us from evil.”  I believe this was all by design. It takes one to know one.  ~ CB